I have been an avid Youtube viewer since last year (as in nakatutok talaga everyday!) . Youtube has been my companion since I started working from home and my husband was working then for a local fastfood  which leaves me at home all alone. I remember the first video I watched then was the "What's in my Bag" tag videos because I am constantly curious on what was on a person's tag. And then this leads me to start subscribing to different channels which leads me to subscribing to another and so on and so forth. I cannot remember what lead me to watching Youtube videos but so far that tag leads me to being somewhat adept on what channels to watch and what to subscribe,

I also do follow Filipino youtubers and one of them is Real Asian Beauty (do check out her channel on youtube https://www.youtube.com/user/RealAsianBeauty ). Real Asian Beauty is Kristine's channel on which she talks about OOTDs (outfit of the day), themed lookbooks, product reviews (skincare and makeup among others), nail art ( I can say she is the Queen!), hauls, vlogs and much more. She is so down to earth and a lovely girl  and she does care for her subscribers too:) I am among the lucky ones who won her giveaway for the first ever Youtube FanFest Manila 2015 which was held at Marriott Grand Ballroom in Newport City, Pasay City last June 26 (thank you so much Kristine :) ). 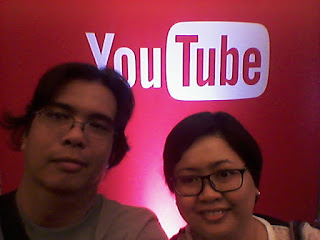 Here is me with my husband who came with me on the event woohoo!

We left home around 2 pm and we reached the venue about 5pm (thank you so much NAIA phase 2 skyway construction which contributed almost an hour to our travel! *sarcastic tone used here*). LOL imagine I literally felt my make up melted and felt so sweaty and tired during the travel hence when we got to the venue, we changed clothes and used a facial wipe to erased my make up (it was so hot during that day I tell you!) and baby wipes for my arms and legs. Oh and yes, we did  bring extra clothes because we know we will need it given how humid our temperature here in Metro Manila is.

We had to go to an assigned room on the ground floor of the ballroom to claim our wrist bands for the event itself and for the meet up. There are also different mini stands for the sponsors of the event like Unilever, Smart, Globe , Philippine Airlines and Selecta Cornetto (Selecta was amazing because they have people going inside the event area to handed out ice creams which are really helpful really because trust me the excitement and energy level inside the event area was amazeballs!). 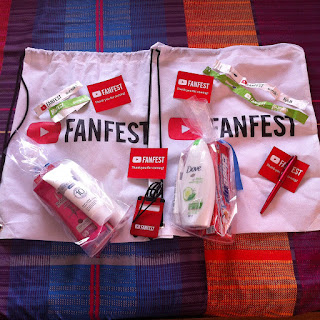 Here are what we got plus the wristbands for the event which serves as our entrance ticket:)

So here was what it looked inside the ballroom: 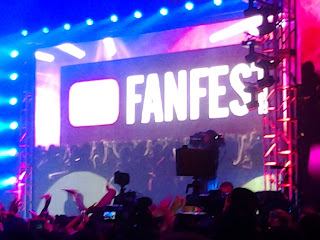 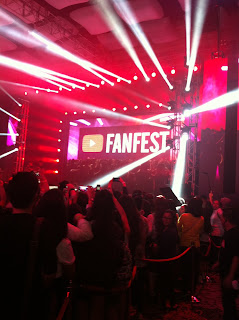 Most of the people went around the stage area (of course perfect vantage point!) to see the Youtubers up close  but sadly some became rowdy to the point when the guests were let in the venue, some were running and some got pushed  even tried to be knocked over for getting a better spot. Hence I and hubby were on the side still near the VIP area but we still got a good vantage point from there and you can easily spot their parents on that area too :)

The excitement (or over excitement perhaps?) is expected since it is the first time for such event to be held here in Manila, Philippines. Imagine watching them on the screen for years then finally you will get the chance to see them up close and personal, ahhh yes, fangirling mode on for sure!  The event started around past 8pm already and imagine all the screaming and the shouting waiting for their fave youtubers to go out the stage.

The youtubers who were there were : JASPOLI (yes that is their fans' ship name for these lads whom consists of Joe Sugg (Zoella's brother, Zoella is also a famous beauty youtuber too who wrote the book " Girl Online") , Caspar Lee and Oli White ), Bethany Mota ( a beauty and fashion youtuber who also graced covers of different magazines and had been one of Dancing with the Stars contestants), AJ Rafael ( he is part Filipino youtuber who became famous for his singing on his channel which captured the hearts of his subscribers), Kristine of Real Asian Beauty ( a local youtuber who got famous for her nail art tutorials, beauty and fashion videos), Ana Victorino ( a local makeup artist/youtuber who is famous for her makeup tutorials and became ambassadress for Dollface cosmetics), Bogart the Explorer (a local youtuber who got famous for doing Australian accent while donning the explorer costume aka Marco Ho, who is the drummer of the band Giniling Festival . He also does Boris too , the Russian guy character), Allstar Productions (local youtubers on which on their channel you can expect they are doing short films and music videos), Abra ( local youtubers who are known for their music ), LDN or Lyrically Deranged Poets (local youtubers who are known for their music ), Loonie (local youtuber who is known for his fliptop/ rap music), Jireh Lim ( a local youtuber who is known for his music , know the song "Magkabilang Mundo"? mmhmm he sang that), Mich Liggayu (from JaMich fame , a local youtuber), Lloyd Cafe Cadena (local youtuber who is known for his life lessons and comedic antics on his channel that will surely leave you smiling or laughing for sure, he now has 2 books under his name),  Donnalyn Bartolome (local youtuber who got famous for her singing on her channel), Kurt Hugo Scheneider ( he is a songwriter, producer and producer of recordings, music videos and films.  His channel reached 1.2 billion plus views and has over 5.5 million subscribers. Oh and his latest vid is a collaboration with Bethany Mota ;) ), Macy Kate (she started with youtube with the help of his friend Kurt Hugo Schneider and she focuses mainly on tween girls who want to share music and to connect) and also with special guests : Apl de Ap (from Black Eyed Peas), and Jessica Reynoso (Apl's newest talent and who got discovered from The Voice Philippines ).

Here are some of the pictures I took during the event:

It was such an amazing event on which I felt it was fulfilling to be there. The tickets were sold out within 5 minutes it was released on the website last June 12 10am. I was lucky to won 2 tickets for the event and I never ever expect to win it to be honest! OH HECK YES!! I am looking forward for next year's Youtube Fanfest event and hoping to score tickets by then. They are all inspiring on which inspires me to create my own channel (part of my bucketlist hopefully to do it soon:) )

Until then, like what Louis Cole of Fun For Louis youtube channel always says at the end of his every video " Peace out.. Enjoy Life.. Live the adventure.. Boom *fist bumps to the camera* 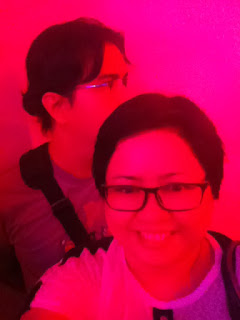 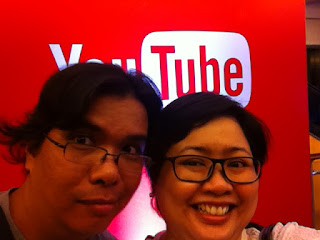 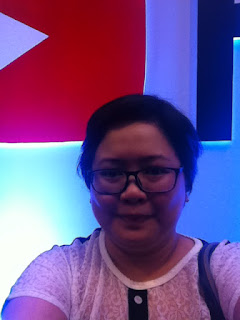